Selenium is a trace essential element that is incorporated into selenoproteins. There are at least 25 known selenoproteins in the human body, their primary roles being antioxidant enzymes such as glutathione peroxidase and thyroid deiodinases that convert thyroxine (T4) to active thyroid hormone (T3). Deficiencies in selenium can be detrimental to health, while selenium excess can be just as dangerous. Brazil nuts are commonly used as a form of selenium supplementation, but it isn’t commonly known that the level of selenium in Brazil nuts is highly variable.

Why Are Brazil Nuts High in Selenium?

Brazil nuts are well known for their high concentration of selenium; however, the amount of selenium is highly variable.

The amount of selenium in Brazil nuts is highly variable. Selenium content depends on the region in which the tree is grown, the pH of the soil, and can vary from nut to nut in a single batch or between trees [2]. According to the USDA, there is 96 µg of selenium per Brazil nut and 544 µg of selenium per serving [3]. A single serving of Brazil nuts is 28.35 grams (1 ounce), with individual nuts weighing around 5 grams. In a single study, Brazil nut selenium concentration ranged from 0.03 to 512 µg/g, a substantial difference [4]. At the highest concentration, a single serving of Brazil nuts (around 6 whole nuts) could result in a selenium intake of 14515 µg, much higher than the recommended daily amount (RDA) of 55 µg [5].Selenium Content of Brazil Nuts 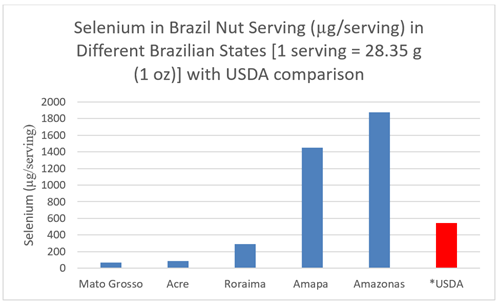 The Institute of Medicine’s Food and Nutrition Board set a recommended dietary allowance of 55 µg selenium/day for adults with a tolerable upper intake level of 400 µg selenium/day [6]. Higher levels of selenium intake in the range of 200-300 µg/day are believed to be effective in the prevention of certain types of cancer such as lung, colon and prostate [7][8]. Adverse effects of selenium intake are seen above 1500 µg/day, with “selenosis” and DNA damage occurring above 3000 µg/day [9][10]. Selenium toxicity can result in hair loss, tremors, kidney failure, cardiac failure, neurological and gastrointestinal issues, respiratory distress and even death [6][11]. Due to the large variation of selenium in Brazil nuts, it is difficult to determine if Brazil nuts are providing inadequate, adequate, or excessive intake.

How Much Selenium Am I Getting from Brazil Nuts?

Measuring the selenium content of Brazil nuts is complex and requires extensive digestion in the lab and time-consuming analytical procedures. Because other foods, beverages, and supplements provide selenium on top of Brazil nuts, it is best to measure total daily selenium intake. Around 50-70% of selenium ingested is excreted in urine, therefore the amount of selenium in urine is proportional to the amount ingested [13][14]. If you are planning on supplementing with Brazil nuts, it is highly recommended that you test your urine selenium levels to determine if safe levels of selenium are being consumed. ZRT Laboratory offers a urine selenium test that also measures other essential and toxic elements.